In recent years, photothermal therapy has become a research focus in the field of cancer therapy for its advantages such as low invasiveness, spatiotemporal controllability. Among the various photothermal agents, two-dimensional (2D) nanomaterials (ultrathin nanomaterials with one dimension less than 100 nm), exhibit the great promise for photothermal therapy and synergistic photothermal therapy, due to their remarkable physical and chemical properties such as thermal, mechanical, electrical, optical properties. Recently, the group of Professor Huiyu Liu in Beijing University of Chemical Technology summarized the progress of 2D nanomaterials including graphene, black phosphorus, transition metal sulfides, transition metal carbides and nitrides, and palladium nanosheets in the field of photothermal therapy in the past five years. This Minireview was published in Angew. Chem. Int. Ed. (10.1002 / anie.201911477). Professor Huiyu Liu is the corresponding author. The first author of is Shuang Liu, a master student, and Xueting Pan, a doctoral student, of Beijing University of Chemical Technology. 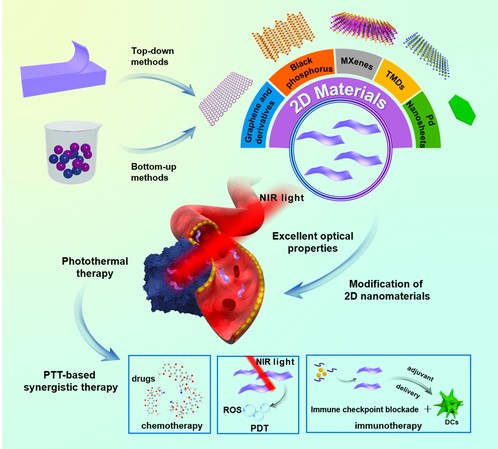 Huiyu Liu is full Professor at BUCT. She received Ph.D. from the Technical Institute of Physics and Chemistry (TIPC), the Chinese Academy of Sciences (CAS) in 2007. From 2007 to 2010, she worked as an associate professor at TIPC. Prof. Liu joined the institute of College of Life Science and Technology at BUCT at the end of 2015. Her research mainly focuses on nanomedicine and nanobiology, including the safe design of **art nanoparticle-based platform for cancer therapy and the characterization and understanding of the biological effects of nanomaterials, with important implications in human health.Her core research focus on photothermal interventional treatment, and the main achievements were published in well-known journals, including Adv. Mater., Angew. Chem. Int. Edit., Adv. Funct. Mater., ACS Nano and so on. So far, Prof. Liu published 80 papers which has already been cited more than 4200 times (H-index 33, Google Scholar statistics), including 40 first/corresponding authorship papers. Among them, 22 first/corresponding authorship papers have been published in A+ Journals with impact factor exceeding 10. Furthermore, 10 patents have been granted.